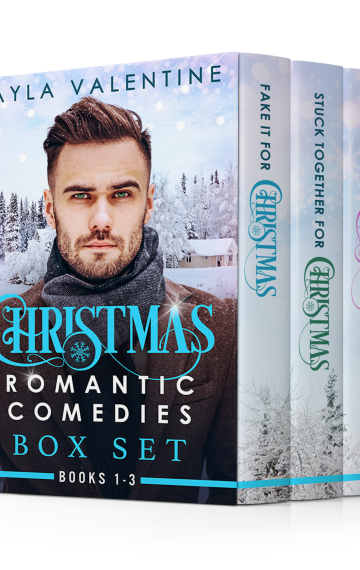 Fake It For Christmas:
It was bad enough agreeing to play my boss’s girlfriend for the holidays,
Then I had to go and fall for his brother…

Billionaires just aren’t like the rest of us, are they?
No sooner has my boss requested my assistance at a winter wedding, we’re boarding a private jet to Aspen, and I’m being introduced to every member of his filthy rich and utterly insane family as his girlfriend – and he barely even knows my last name!
I know I’ve bitten off more than I can chew,
I just need to play this role for a few weeks, collect my check and go.
So why can’t I tear my eyes off his brother?

Stuck Together For Christmas:
It was supposed to be my getaway Christmas,
Now, I’m stuck sharing with my brother’s best friend,
This has just turned into the holiday from hell!

For the first time in years, I was excited about the holidays,
A week of sun, sea and luxury, curtesy of my newly loaded brother.
I should have known there’d be a sting in the tail…
The moment I arrive in Hawaii, I realize there’s an intruder in the house,
And it’s no burglar—no, it’s far worse than that,
Because Ryan Finch—my brother’s business partner, and the same man my mother’s been trying to hook me up with for years—is apparently here for the holidays as well.
The longer we spend together, the harder it is to remember all the reasons why I told myself that going there would be a terrible idea,
And my relaxing Christmas getaway has just turned into the ultimate exercise in restraint.
Will I give in to temptation and find that he’s more than his reputation, or will the truth that I’m trying to ignore leave me crushed?

Bad Boy For Christmas:
She’s sure she can save their bacon in time for Christmas,
She just needs not to fall for the bad boy in the process…

There I was, reeling from the biggest disaster of my life, with my PR career in smithereens,
I was bracing myself for the worst Christmas ever.
Then I saw a shot at retribution.
Tyler Bliss, Boston’s hottest bad-boy hockey star, finally thrown off his team.
I know I can change the public’s perception of him and get him reinstated, he just needs to clean up his act, and follow my plan to the letter.
Given his reputation, that might be more difficult than it sounds…
Can we make our own Christmas miracle?