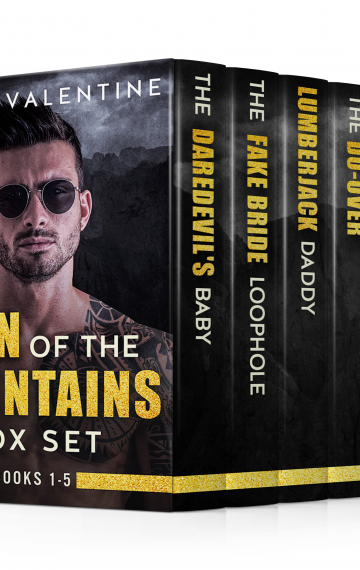 Men of the Mountains is Layla Valentine’s complete blockbuster series of mountain man romance novels. Five steamy and salacious tales of grizzly, western heroes, daring heroines, and enthralling romance await you, and all for a bargain price!

The Daredevil’s Baby:
He’s the thrill-seeking pilot who balks at nothing,
But discovering he’s about to be a daddy?
This time he’s flying blind.

The Fake Bride Loophole:
I saved her from being brunch for a grizzly bear,
Now, it’s her turn to save my skin…
I need a fake bride, and she sure fits the bill!

Lumberjack Daddy:
He’s a bad boy with a past, and it’s my job to uncover it,
But my boss didn’t mention that he’s not just a gorgeous lumberjack, but a doting single dad!

The Do-Over:
The most hated man in town is back,
And what’s worse? I can’t resist him

Twins For The Grizzly Boss:
He’s her brother’s boss, and now she has to answer to him too,
…she never expected to walk away pregnant, with twins!